Media Partner
Partner
Since 2013, Sparknews has brought together an alliance of 50 newspapers committed to solutions journalism. 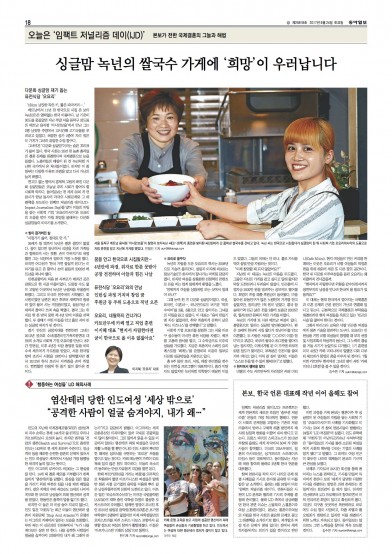 Dong-A Ilbo, first published in 1920, is the newspaper with most authority and tradition in South Korea. For over 90 years, Dong-A Ilbo has strived continuously to publish honest and reliable articles. During the military dictatorship the paper represented the voice of the public longing for political democracy, and after democratization, it has strived for the development of the market economy. This has undoubtedly served as the driving force behind Dong-A Ilbo’s continuous progress over the last nine decades. Currently, Dong-A Ilbo is sending correspondents to some of the world’s major cities such as Paris in order to bring the readers vivid and fresh news. By participating in IJD activities and collaborating with the foreign media, it is our goal to deliver various in-depth articles discussing the problems our world is Korea is a country where information technology such as the internet and smartphones are developing faster than any other country in the world. On the dark side of this incredible progress are its side effects which can serve as a reference point for other countries. In addition to information technology, Donga will provide the world readers a wide range of comprehensive articles spanning from K-Pop to the North Korean issue that would interest the international community.

SUPPLEMENT HERE
We use cookies to measure the audience of our website and to optimize your online experience. By continuing your visit to this website, you accept the use of these cookies.Ok