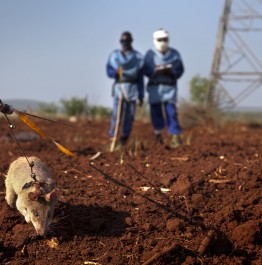 Apopo, Tanzania: Rats to the Rescue

At a research laboratory in Morogoro, Tanzania, an African giant pouched rat named Vidic is navigating a row of 10 holes in the base of a glass cage, under which lie trays of human sputum samples. Stopping at one hole, he repeatedly scratches it, sending a signal to his human observers. He has detected the scent of the bacteria that causes tuberculosis.

Rats are widely seen as pests in Africa, hated for the damage they do to crops and food stocks. But a Belgian NGO named Apopo is changing perceptions of these rodents by training them to sniff out two lethal dangers: landmines and TB.

In 1995, a product designer, Bart Weetjens, was researching the issue of landmines in Africa when he came across a publication about gerbils used to detect explosives. He had kept rodents as a child, and knowing their acute sense of smell, intelligence and ability to learn, now realized that rats could facilitate demining operations. Weetjens went on to develop Apopo through a partnership with the Sokoine University of Agriculture in Morogoro.

Apopo’s landmine detection rats receive their daily training on an expansive tract of land on the university campus, kitted out in mini-harnesses attached to ropes. Training starts at 7 a.m. to protect them from the hot sun. As their handlers guide them between markers, the rats stop and scratch at the ground when they pick up the scent of TNT. They are rewarded with snacks for identifying their targets.

Weighing just over one kilo on average, the giant rats are too light to set off mines, unlike dogs. They also tend to be very focused. “One rat can clear 200 square meters in just 20 minutes,” said training supervisor Lawrence Kombani. “It’s a task that will take a human using a metal detector some 25 hours to complete.”

Over nine months of training, the rats pass various trials before progressing to live minefields. The method has been highly effective. Since 2006, Apopo claims that its rats have helped to clear nearly 18 million square meters of land of explosive devices in Mozambique, Angola, Thailand, Cambodia and Lao PDR. Ensuring that explosives are safely defused means not only saving lives but also putting land back into use again, empowering local communities.
Since 2007, Apopo’s rats have also been tackling tuberculosis. Weetjens found inspiration for this initiative while reflecting on the Dutch word for tuberculosis: ‘tering,’ which refers to the smell of tar. Even humans are attuned to the particular odor of tuberculosis in its very late stages; he remembered his grandfather commenting that a neighbor who suffered from the condition “smelled like TB.”

According to the WHO, nine million people a year get sick with TB, and health systems miss one-third of them. Undiagnosed patients can infect others with the airborne disease, which can be deadly if untreated.

Trials began in 2002, and following a successful pilot, Apopo secured seed funding from the World Bank. Currently Apopo collects samples from 24 clinics in Morogoro and Dar es Salaam. Two years ago the program was replicated in Mozambique, a country which has been severely afflicted by the rapid spread of TB, declared a national emergency in 2006.

At just five weeks old, Vidic and his 30 fellow TB-detection rats started learning to associate smell recognition with a clicker sound and food reward. The TB samples they work with are sterilized to inactivate the harmful pathogens, but not their odor. Samples which Vidic suggests are positive—by pausing and scratching at the respective hole—are then re-tested via microscopy. “The indication has to be very strong; the scratching has to go on for between three to five seconds,” explained training supervisor Fidelis John. He added that one rat can clear 70 samples within 10 minutes, or faster than a lab technician using standard microscopy. The rats can work effectively for around seven years.

Apopo maintains that its low-tech system is sustainable and inexpensive, without the overhead of costly equipment, chemicals or maintenance. (Private individuals can help finance training and care for these “HeroRATs” via a virtual adoption program.)

At present, Apopo is undergoing accuracy tests in a bid to convince the WHO to accredit the technique. The organization already claims to detect an additional 39 percent of cases that were initially found negative by screening at health clinics, or 1,412 cases in 2014 alone. “Mycobacterium tuberculosis can hide from the microscope lens but cannot disguise the odor it produces from our rats,” said quality control supervisor Haruni Ramadhani.

The rodents’ keen noses can make the difference between life and death. Earlier this year, 34-year-old Nacho Shomari was suffering from a persistent cough, chest pains, weight loss and fever. “Doctors suspected TB but all the tests came out negative,” he recalled. Because he was unable to provide for his family, his mother and sister also fell ill, from hunger.

In February, bedridden and failing, Shomari received what he described as a “miracle phone call” from a volunteer at a patient-tracking organization that works with Apopo. The rats had screened his sputum sample and pronounced it positive. That same day he began taking anti-TB medicines. “Look at me now,” he said glowingly.