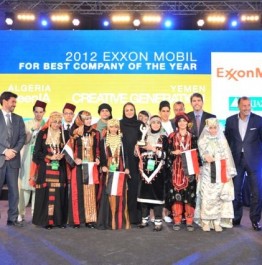 It is dark outside and 19 year old Wafaa Al Rimi has lit her solar lamp. Meanwhile, the noise of electricity generators, powered by fossil fuel, can be heard around the block. Many Yemenites are obliged to buy small generators, in the face of electricity shortages that last for up to 18 hours a day.

Along with her colleagues at Creative Generation; a student company in the making, Wafaa Al Rimi is trying to help resolve the electricity shortage problem and limit carbon monoxide pollution; the latter due to the widespread use of power generators which are cheap and don’t conform to specifications.

In 2012, Wafaa Al Rimi along with 15 other students at the Sayeda Zeinab Secondary School for Girls in Sanaa, invented three products that operate on solar energy. The first was an umbrella, whose top comprises solar cells linked to an organizer and sockets, which allows users to charge a mobile phone and light a small lamp. The second was a propeller operating on solar energy and the third was a lamp that can be charged thanks to a small solar panel, which can be placed by the window.

The inventions won the first place in a student competition held in 2012 in the Qatari capital, with the participation of students representing MENA countries in the field of entrepreneurship.

Wafaa Al Rimi told Al Hayat newspaper that the three products were created by assembling parts and adding protective and insulating materials, to guarantee safe charging of the products while using solar energy. She added that the students got their inspiration to create devices that operate on solar energy from the general suffering due to continuous power shortages and wars in their country, which have resulted in the migration of thousands of citizens, namely in the departments of Saada and Abin.

In the poorest MENA country, where more than 50% of the general population earn 2 dollars a day, energy shortages have contributed to aggravating the suffering of the poor on one hand, and have hindered economic and social development plans on the other.

It is also important to note that the services provided by the National Electricity Company cover only 60% of the needs of a population of almost 26 million inhabitants, knowing that the median individual consumption of electricity lies at 190 kilowatts, in comparison with a worldwide median of 2751 kilowatts.

The new products promoted by Creative Generation could provide the poor and those with limited income with a guaranteed source of clean energy. This is especially important given price increases in the field of home solar systems, the absence of any indications about improvement of the services of the official electricity company and the rise of consumption fees.

Amidst accusations that the present educational system is regressive and that it fails to promote the values of creative thinking and innovation, Wafaa Al Rimi reminded Al Hayat that their project would not have been feasible without the help of Injaz Yemen, a non-governmental organization that uncovers and sponsors students who pioneer projects in the business sector, through a program named the “Student Company”. Majed Al-Shamiri, the executive director of Injaz Yemen, says that the students who set up Creative Generation presented a good sample with their project, despite the fact that they are still at secondary school and are witnessing difficult times, because of the general situation in the country. Al-Shamiri explained that the students have been able to produce and sell their product in small volumes, noting that this family paced production can be a temporary solution while the company develops its capacity and finds the capital sufficient to start a production line.

The company president, Wafaa Al Rimi, sees that the money earned from selling these family produced devices goes to the people who participated in collecting the capital. Al Rimi points to certain difficulties, some of which are related to the young age of the students, to Yemeni society being unaware of the importance of solar energy, and to the delay in fund provision by the private company that committed itself to financing the establishment of the company. Al Shamiri puts the blame on the Yemeni private sector, for not having the courage to train and support owners of private sector initiatives and student companies.

Since 2011, Yemen has witnessed an armed conflict that has led to a slow-down in economic activity and caused the services sector to deteriorate. During this time, power generation facilities have been considered a target for the parties involved in the conflict, according to researcher Majed Mazhaji, who pointed at the link between the political conflict and corruption, in what became known as trafficking in the darkness. Last April, Yemen was submerged in darkness, because of the armed conflict between the forces supporting the Yemeni President Abd Rabbuh Mansur Hadi, and the Houthis who masterminded a coup d'état. This was the first time a power shortage lasted several days and encompassed the whole country.