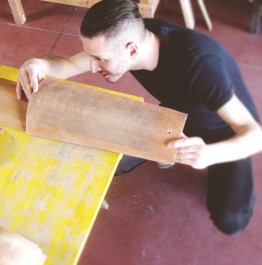 An Italian company is making photovoltaic roof tiles that perfectly mimic materials such as terracotta, stone and wood

In historic centres and buildings throughout Europe, obtaining permission to install a solar photovoltaic (PV) roof can be complicated. Aesthetic landscape constraints are often so strict that the limitations become prohibitive, unless the solar cells are invisible.

Hence, many have tried hiding or embedding solar roof panels in a material that resembles what is often used for roofing, stone paving or to clad blind walls. Elon Musk’s Tesla, for example, came up with a glass-layered shingle. Products like these are more or less invisible from the street—but from a certain height one can see the dark cells, an unacceptable idea in places such as the renowned Paris roofscape.

Now Dyaqua, a small family-owned company in Vicenza, Italy, has created a product called Invisible Solar, a PV roof tile unlike anything else on the market. And it has sparked an immediate boom.

Dyaqua inserts the PV cells inside a polymeric compound that mimics common building materials such as stone or wood so that the solar cells are completely invisible to the human eye.

“Since we started production a few months ago, we can’t keep up with orders, not only from Italy, but from France, Spain and the United States,” said Giovanni Quagliato, a Vicenza-born artist specialised in creating epoxy resin artwork, who discovered the secret to giving a totally natural look to polymeric compounds, while keeping them transparent to light.

The compound can be transformed to look like any building material, whether terracotta, stone, cement or wood. It is non-toxic and recyclable, built to withstand high static loads and resistant to atmospheric agents and chemical solvents. “It’s all about density: it has to be enough to fool the eye, but not too much, so as not to block the rays of the sun,” explained Quagliato. Years ago, he launched a production line of LED lights called Medea, based on the same technology. He then went on to create PV systems with his line Dyaqua, launched in collaboration with the Italian National Agency for New Technologies, Energy and Sustainable Economic Development (ENEA).

“The principle is the same: in the lamps, the light comes from the inside and must go outwards, while in PV tiles, the rays of the sun come from the outside and must penetrate the transparent material and reach the solar cells,” Quagliato explained. Applying this theory, however, was no easy task. Achieving the ideal concentration took years of hard work. The prototype’s efficiency was then tested by an independent scientific body. The tests confirmed an impressive performance of 70 peak watts per square meter, or about half the performance of a classic photovoltaic module.

Invisible Solar is available on the market for 7 euros per watt, against 1-2 euros per watt for standard PV modules. “You have to keep in mind that these are handcrafted products, designed specifically for historical centres: prices can often vary from 1 to 7 euros even for regular tiles and historic centre roof tiles,” Quagliato noted.

For now, Dyaqua survives on the production of LED lamps. The photovoltaic products are not financially sustainable, because they require an exorbitant amount of manual work. So far, there aren’t any machines capable of replacing the careful hand of man in applying different layers of resin at varying densities, both above and under the photovoltaic cells, with the right curvature for the perfect roof tile. The creation of flat surfaces resembling stone or cement is simpler, but it is still a delicate task that cannot compare to the industrial production of ordinary tiles or solar panels.

“To accelerate production and keep up with demand, we would have to invent machines that integrate or replace manual work,” said Quagliato. Only in this way can mass production be achieved, contributing to lower prices and increased product competitiveness with large producers, such as Tesla’s Solar Roof.

But Dyaqua lacks the funds to invest in a machine. Quagliato’s children, Matteo and Elisa, launched a crowdfunding campaign on IndieGoGo, attempting to raise USD 20,000 to pay for one. “Invisible Solar is my dream of a healthy world,” noted Matteo, “where technology has the natural appearance of our landscapes."