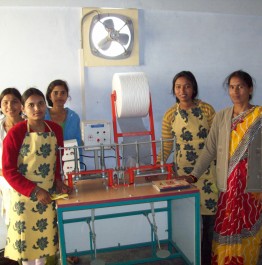 From Rags to Riches

Imagine a mother walks into a room she thinks is full of chicken feathers and discovers they are really hundreds of bloodied sanitary napkins. Would she not think that the devil had gotten into her son and want to have him certified as mad?

Imagine a woman catches her husband hanging outside the girls’ dormitory of the local medical college. Would she not think he is having an affair and ask for a divorce?

Imagine a man who wears a sanitary napkin and uses an artificial bladder full of animal blood to replicate the messiness and discomfort of a woman during her period.

What you have is a portrait of Arunchalam Muruganantham, a resident of Coimbatore in the southern Indian state of Tamil Nadu. Though he describes himself as little-educated he has gone big with his innovative low-cost machine to manufacture inexpensive sanitary pads for rural women. He thinks of his project as a movement rather than a corporate enterprise, and it has caught on across India and in several other countries.

The story began in 1998, after Muruganantham discovered his wife was hiding some filthy rags that she had used to manage her period. When he asked her why she was using rags, she replied, “Even I know about sanitary napkins. But if I and your sisters begin to use these, we will have to cut the family milk budget every month!”

In India and other developing countries, menstrual periods can be disempowering or even deadly, as girls and women without access to affordable sanitary napkins must choose between staying at home or using old rags or leaves that can lead to reproductive diseases. According to a government survey, only 12 percent of Indian women use sanitary napkins. Muruganantham believes the figure among rural populations might be just 2 percent.

A school dropout, he began his career as a welder in a small factory that he later bought from his employer. Now he made it his mission to find a solution for his wife and other women. He trotted out to the store to buy himself dozens of sanitary napkins. “I don’t think any man in the world had touched a sanitary napkin before, for it is none of men’s business. But I made it my business,” he said.

He ripped one apart to see what made it work. Then he needed a volunteer. Of course he thought of his wife, but one woman was not enough. “It would have taken me decades to get it right,” he said. When Muruganantham asked his sisters to help they threw him out of their homes. He then steeled his nerves to hang outside the local medical college, as girls preparing to be doctors were likely to be more amenable to his “indecent” proposition. But he soon discovered that even these medical students shied away from the experiment.

So he began to wear a sanitary napkin himself. He wondered why the animal blood that he used leaked all over the place and the napkin did not absorb the fluids. That is when he discovered he must use a particular cellulose made from pine wood.

“The wood cost just pennies but was selling for pounds,” he said. The price difference came about because an industrial-grade machine producing branded sanitary napkins cost around US $575,000. Muruganantham set about making a smaller, cheaper machine that would grind, defibrate, press, and sterilize the pads before packaging them for sale. His mini-machine sells for less than US $2,000, meaning the pads can be priced at about one-tenth the cost of their branded equivalents. Operable from a living room table top, the machines eliminate the need for a factory to manufacture the pads.

Muruganantham called his company Jayaashree Industries in honor of his sister who surreptitiously dropped him food packets from her window during the period he was ostracized by the community. At around the same time she gave birth to a daughter, Jayashree, meaning “victory.”

When it came to manufacturing and marketing his invention, the Indian government proved unhelpful and Muruganantham couldn’t compete with the advertising budgets of multinational brands. But he got lucky when in 2006 the Indian Institute of Technology in Madras (Chennai) registered his machine with the National Innovation Foundation for its Grassroots Innovation award. He won. Suddenly, the world took an interest in his product and he received some serious capital.

The machines can now be found across rural India, producing regional brands of sanitary napkins with names like Relax or Be Cool. Not only have they helped to bring millions of women out of messy periods to cleaner, more hygienic menstrual days but they have also generated employment and income for the rural women who operate them.

All is right with  Muruganantham’s world again. His estranged wife called him soon after she discovered he had not really been running after the medical students. His mother moved back in with him. And he has overcome one major stigma in rural India—the belief that women who use napkins are devils’ brides. Teenage girls can now go to school every day and nobody has to know when they are having their periods.