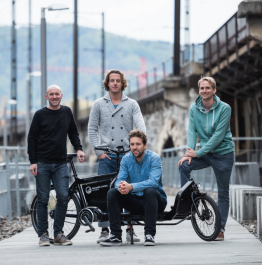 Headed for a Two Wheel Revolution in Transportation

Martin Sturzenegger
With its novel product transportation system, Imagine Cargo aims to reduce carbon dioxide (CO2) output by up to 99 per cent. Now the Zurich start-up launches its service beyond the Swiss border.

Just clicking the “Order” button in an online shop is a burden to the environment, and since more and more people are ordering online this has far-reaching consequences. Products coming from abroad in particular trigger an enormous transportation apparatus when delivering packages: Delivery vehicle-airplane-delivery vehicle, and according to a recent study by Cambridge University climate experts, the transportation of goods accounts for roughly one quarter of today’s global CO2 output.

While haulage companies are pleased with the rising transport volume, they are angered at the same time because of congested streets and occupied parking spaces. However, the start-up, Imagine Cargo, isn’t: “It sounds like a paradox, but the more the streets are filling up, the more interesting our business model becomes,” says CEO Nick Blake. The strategy of the Zurich based company is both simple and effective: They use bicycles and trains instead of planes and lorries. A cycle courier collects the package from the sender and takes it to the railway station, where it is transported to the target city by train. There, a second cycle courier picks up the package and delivers it to the addressee.

Blake, a 48 year-old logistics professional, worked for both FedEx and UPS for many years. “CO2 output in this industry is enormous and still growing,” he says. As part of a scientific study, Blake researched sustainability concepts for the transportation industry. And what did he find? “There are none.”

As a result, in early 2014 with the German cycle logistics expert, Benjamin Duh, Blake founded Imagine Cargo. To them the use of cycles for delivery and trains for transportation seemed obvious, and yet up to this point no delivery company had consistently implemented the concept: “We were surprised, since it would reduce CO2 emissions by 99 per cent,” says Blake.

According to the Swiss-based MyClimate Foundation, the CO2 emitted often literally outweighs the delivered goods: travelling 800 kilometres, a 5 kilogram package creates up to 12 kilograms of CO2. “This is a strain on our environment we’d rather avoid,” says Blake. It’s a strain to the purse as well: An increasing number of countries are imposing a CO2 tax on private companies, as has been the case in Switzerland since 2008. “Many companies are ignoring the external costs. This, however, will lead them to a dead end,” says Blake.

Although the start-up soon won various environmental awards, like the Zurich Climate Award, it cost a considerable amount of time, nerve and money before the idea was introduced into the market. Last year, Imagine Cargo was launched in Austria for the first time and Vienna, Graz, Salzburg and Linz all benefited from the sustainable parcel service. But at the turn of the New Year the Austrian Federal Railway (ÖBB) announced grim news: it was cancelling its rail courier parcel service. Imagine Cargo was back to square one.

This step backwards was followed by two steps forward. In Germany, Imagine Cargo has been operating successfully since spring in the cities of Berlin, Munich, Frankfurt, and Freiburg, and this summer the company will move closer to its main objective: a trans-European distribution network. From then on, the service is intended to be available in Switzerland as well – in Zurich, Geneva and Bern. The Swiss Federal Railway (SBB), envisaged as a partner, welcomes the idea: “We are supporting the cycle-train-cycle combination for international courier business,” says SBB spokesperson Michelle Rothen.

After a tough time in their field of business in the last few years, cycle couriers too are hoping for additional commissions and are now profiting from the recent global trend towards sustainability. Basel-based cycle courier and entrepreneur, Jérôme Thiriet, is negotiating with Imagine Cargo. He speaks of a “striking concept” and an “interesting market” opening up right now: “We don't want to miss this,” he says. In bustling city traffic, a bicycle can reach its destination about twice as fast as a delivery vehicle. However, cycle transport does have one drawback: the reduced capacity. But couriers are aiming to remedy this by technical innovation. In Thiriet’s case an electric-powered cargo bicycle, enabling the courier to carry up to 300 kilograms per delivery.

The major providers in the transportation business are feeling the competitive pressure coming from new and innovative companies like Imagine Cargo. “We are moving inside a very diverse market,” says Bernhard Bürki, media spokesman for the Swiss Postal Service, and the public service has launched its own means of sending courier mail in a more environment-friendly way. On the whole, the Swiss postal service is profiting from a strongly growing market, as are all delivery companies. It transported 115 million packets in the last year alone, three million more than in the year before and five million more than 2013, compensating for the floundering letter post, which has been in decline for years.

The main driving force in the industry, as everywhere, is purchases over the internet, which are a two-fold strain to the environment. In Germany, about 800,000 packages are returned to sender every day, which according to the Freiburg Ecological Institute results in a surplus CO2 output of 400 tonnes. Various governments are alarmed by figures like these and are starting to include CO2-saving measures in their energy strategies – like in Zurich, where the department of the environment explicitly recommends electric cycles for urban transport.

Thus, the intra-European delivery service might soon become climate friendly. But there still seems to be no alternative to transoceanic transportation. Or is there? Various companies are developing high-tech sailing ships that will be considerably faster than container ships – and more environment-friendly. “This is also imaginable for Imagine Cargo. Maybe your cycle couriers will be soon waiting at the docks instead of the railway station.”


We use cookies to measure the audience of our website and to optimize your online experience. By continuing your visit to this website, you accept the use of these cookies.Ok