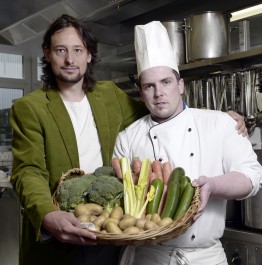 ‘Eaternity’, Switzerland: How much CO2 in a carrot?

The sautéd chicken breast on a silky brown sauce is surrounded by mixed vegetables and French fries. It’s a lunch dish that could be on the menu of any staff restaurant or university canteen. But there’s a difference – this one has a rather encouraging carbon footprint.

You can taste it at Technopark Zurich’s self-service restaurant Villaggio, which sells between 300 and 400 meals a day. Villaggio is run by Compass Group, the head chef is Daniel Mietusch. He has recently begun to plan his menu with Eaternity's carbon emission calculator, which allows him to compose a daily dish from the most climate-friendly ingredients. “The time it takes is reasonable,” he says. The important thing is to select seasonal vegetables and use chicken breast produced in your own country rather than in Brazil. Compass Group has not set any targets at this stage, Mietusch says, it’s more a matter of experimenting how much CO2 can be saved with the Eaternity tool.

Around him the kitchen is abuzz with preparations for the lunch service. Potatoes are swimming in the deep fryer. Someone is cooking 20 chicken breasts in a bathtub-sized industrial sauté pan. Another one adds a few pinches of pepper to the vegetables. Mietusch is now talking to a man who stands out for being the only one in here not clad in a white apron. He is wearing a green jacket. He is Manuel Klarmann, the CEO of Eaternity.

He and his team have developed the said carbon emission calculator; his organisation also managed to land a big fish when it added Compass Group to its customer base. Compass specialises in group catering and operates some 230 venues across Switzerland. It has recently committed itself to reducing its carbon footprint by 20 per cent by 2020 – no mean feat considering that the food we consume produces roughly a third of all CO2 emissions. To live up to its commitment, Compass works closely with Eaternity and has designated 44 of its restaurants to be part of the pilot programme. The guests are made aware of the carbon-saving efforts – no point in setting an example without anybody knowing.

Manuel Klarmann and his partner Judith Ellen laid the foundation for Eaternity in 2008:  “We found that the link between science and practice was missing.” In other words, what’s the point of all the studies and insights on the carbon footprint of our food choices if the chefs and their guests don’t have a clue about it? What started out as an NGO grew into a start-up four years later: “We realized that we could make a living out of our idea,” explains Eaternity’s Klarmann, who studied mathematics. The first contact with Compass Group was made in 2013, and a year later Eaternity went public by forming a shareholding company, Eaternity AG. This was necessary to put the cooperation with Compass on a contractual footing. Which begs the question whether Manuel Klarmann is an entrepreneur or an activist. “I am both in equal parts,” he says. “We have passed up on a few deals because they did not fit the Eaternity philosophy.”

Eaternity employs six staff for a full-time equivalent of 4.5. They are financed from the annual service fee of CHF 1,300 that Eaternity receives from each participating gastronomy business. So what does this service consist of? “We cover three areas,” Klarmann says. “On the software side, we have developed the carbon emission calculator, the so-called Eaternity Cloud, which enables smooth planning of sustainable, climate-friendly menus at each restaurant.” On the scientific side, he says, it’s a matter of evaluating the latest studies on the nexus between climate and food, “and we even carry out our own by now”. The close and active collaboration with the gastronomy industry forms the third area of service. This involves generating monthly reports on the carbon footprint of each participating restaurant – i.e. the CO2 value of each recipe and its ingredients – the promotion of Eaternity Award labels and the acquisition of new clients. “We have set ourselves an ambitious goal of having four more clients of the size of Compass Group within three years.” It would mean working with some 4,000 restaurants, Klarmann says. At present, Eaternity is negotiating in Germany, Austria, Netherlands, UK and France.

What distinguishes Eaternity Cloud from the traditional methods of computing CO2 emissions? How does it differ from the eco-consulting services of its competitors? Some of the parameters for calculating the carbon footprint of a plate of spaghetti bolognese, for instance, would be the same, Klarmann says. These include the use of water and fertilisers or the harvest period; in this regard, Eaternity works closely with the School of Life Sciences and Facility Management in Zurich-Wädenswil. What distinguishes Eaternity, Klarmann says, is that it also takes into account various dynamic factors: Was the vegetable produced in a greenhouse? What distance did it travel? How long was it stored? What kind of packaging was used? Did any ingredient have to be frozen? All in all, Eaternity factors in about 50 such parameters, which for the sake of simplicity are being converted to kilograms of carbon dioxide, to allow direct comparison of the ingredients of a dish.

Manuel Klarmann is convinced that sustainable food can make a huge contribution to climate protection. “Everybody has to eat at least once a day.” He also believes that food is a good way of getting people interested in the topic.

It is lunchtime. The first guests at the Villaggio are now eating their choice of dish. Indeed, the chicken breast with vegetables and French fries can be seen here and there. Time for a spot check among a handful of guests. Did you choose the Eaternity dish because it is climate-friendly? “No,” is the answer from more than one. It was just the dish they felt most like eating.