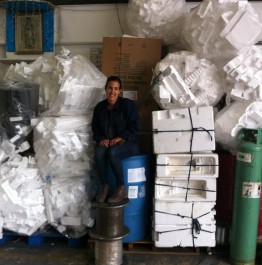 In the modern world there are few things more ubiquitous, however invisible, than those made out of Styrofoam. Also known as Unicel or Expanded polystyrene (EPS), this inexpensive lightweight material is used to make cups, plates and trays, or to fill the boxes of electronic products. But it has its disadvantages. The biodegradation process of EPS takes decades or even centuries and it is consumed in such vast quantities that its current disposal methods always seem hopelessly behind.

Marissa Cuevas Flores, a young engineer in renewable energy from the University of Berlin, decided that she had to do "something" to dispose of Styrofoam waste. As a result of her efforts she managed to completely transform Styrofoam and at competitive commercial pricing. She produced “KITCEL”, a biodegradable varnish made of disintegrated EPS, harmless to the environment and with a nice aroma. One liter of its most expensive variety, the "Custom made" varnish, has a price tag of 170 pesos (less than twelve dollars). Marissa declined to speak about costs, but conceded that the use of natural solvents in her process "is much more expensive than using the conventional ones".

Currently KITCEL produces around 60 liters of varnish. But with a new "reactor" (chemical reactor) acquired through crowdfunding backed by the group "Fondeadora", Marissa hopes to produce 250 liters every three hours. "The idea is bright," said Fanny Villiers, project director of "Fondeadora", organization which helped finance the young engineer’s project KITCEL / reutilizadora - enabling Marissa to obtain around 80,000 pesos (about five thousand dollars) to produce the chemical reactor.

The problem is not the raw material. In 2013, Mexico consumed up to 619,685 tons of Styrofoam, but the material is so light and so malleable that one kilogram can be very bulky and many people do not know what to do with it. Thirty cups made of Styrofoam become, once processed and reused, a liter of varnish. Which means that there is a lot of opportunity there. Marissa says that she started thinking of more products: glue, organic paints, paper and laminated cloth made using Styrofoam. "The lab is my life," she said.

But the field in which she has to play is huge. Of the 13,500 million pieces of Styrofoam used every year in Mexico, less than two percent are recycled. This amount represents 15 percent of the waste produced in the whole country, according to official statistics. The irony of this is that "it's just air... it is 95 percent air," said Marissa. But until now, most processes for reuse consist of grinding to transform Styrofoam into other products, such as pellets that can be molded into other things, or than can be used to fill insulation in buildings.
In the meantime huge amounts of Styrofoam keep growing nonstop. According to the National Institute of Ecology (INECC), "Mexico generates 102,895 tons of Solid Waste (MSW). Expanded Styrofoam generation is estimated at 1,698 tons per day and 619,685 tons per year."

To invent KITCEL Marissa was inspired by academic research about the cancellation of a commercial project to recycle Styrofoam. "That's when I realized that I could do something" and that my Master's degree could wait, she said. Soon, she began to experiment with her product in the roof of her house.

Today KITCEL, the biodegradable interiors paint which comes in seven colors, in pine, lemon and orange scents, is being sold in some popular markets of Mexico City and can still be described as a handmade product. "At first I sold it in jam jars," she recalls. Sales are still small, but the growing diffusion of her invention and the growing need to dispose of EPS combine to help Marissa solve a real problem.

For further information, visit their website and check out their video.