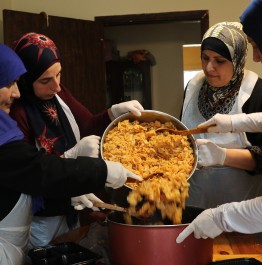 Wearing a helmet, elbow and knee pads, his yellow security jacket reflecting the sun that has come out after a rainy afternoon, Ibrahim rides his e-bike through the chaos of traffic in Beirut. The young man might be dressed like a delivery boy, but he has nothing to deliver – rather, he collects. Ibrahim is one of 400 collectors of the Live Love Recycle project, which provides Beirut’s citizens with a free, on-demand service picking up recyclables.

The Live Love Recycle initiative is more than welcome in the Lebanese capital, where waste of all kinds is thrown away unsorted in a single plastic bag, ending up either in coastal landfill likely followed by the Mediterranean Sea, or else being burned in the streets. So far, the Lebanese government has failed to create an efficient waste management system that would be both environmentally friendly and mindful of citizens’ health and well-being.

Yetthe Lebanese are no quitters. The country’s 2015 waste crisis sparked massive protests and lasted for eight months, until the government finally introduced a temporary plan. However, it also enabled the creation of several alternative projects to deal with the issue. One of these was Live Love Recycle, launched by Georges Bitar, a member of Live Love Lebanon, an NGO that supports the environment, communities and culture. “In 2015, thousands of people protested against the trash crisis. It was a very understandable reaction. But at Live Love we do not like to complain; we prefer action. It runs in our blood,” explained the 30-year-old.

Looking for ways to finance his project, he contacted the French NGO ACTED (Agency for technical cooperation and development), which eventually became a partner. He also reached out to the United Nations World Food Program, which now funds and supports the project.

After months of paperwork, recruitment and training of collectors, the service started operations in Beirut on April 9, 2018. To gain access, a user must download the Live Love Recycle mobile application. Two clicks and a half-hour later, an e-bike comes to the doorstep to pick up the household’s recyclable waste (paper, cardboard, plastic, metal and cans).

“I was already used to sorting my waste, but since I had to take it to the recycling center myself, I was less involved. Now that I’m using Live Love Recycle, I pay attention to waste sorting again,” explained Zeinab Ajami, who has used the service several times.

Later, the collected waste gets delivered to another Lebanese NGO, arcenciel, for proper disposal.

“What I like most about this job is that we contribute to protecting the environment,” said the collector Ibrahim. Like him, every one of the 400 recyclable material collectors is Syrian. Some of them willingly volunteer for extra unpaid hours, enjoying the friendly, family-like atmosphere at the Live Love Recycle’s control center – a warehouse where more than 50 e-bikes and four tuk-tuks are parked.

Every day at noon, about 20 women recruited and trained for the project prepare hot meals for the collectors. They gather each morning in groups of six or seven at one of their homes and prepare more than 80 meal platters. Mirna Toutayo, a housewife and mother of three teenagers who cooks for Live Love Recycle, said the salary she receives “helps tremendously to cover the family’s expenses.”

“Providing hundreds of job opportunities to women and people coming from vulnerable communities makes Live Love Recycle a 100% social initiative,” said Bitar, who is determined to continue on this path.

Bitar is full of ideas for the future. But he is also aware that developing his project will take time. Working in collaboration with the Municipality of Beirut, he wants to start by setting up a dozen waste bins throughout the city, painted in the project’s colors. “With those bins, we can reduce the collection time and increase its pace until we are able to collect 20,000 bags a day,” he said.

Bitar is optimistic about the project’s sustainability, while noting that “Ideally, the government should launch a similar initiative.” Hadi Mahdi, Live Love Recycle’s Operations Manager, added: “When a project is good, there is always a way to ensure its future.”
We use cookies to measure the audience of our website and to optimize your online experience. By continuing your visit to this website, you accept the use of these cookies.Ok