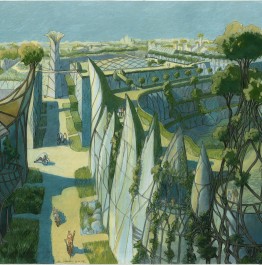 Son of an architect, Luc Schuiten used to design vengeful trees.  This trail-blazer built his first house in the woods, on the outskirts of Brussels: a simple structure, a glass wall open to the sky with solar panels on the roof, in order to live in symbiosis with the Earth.  An enthusiast for unleashing butterflies, the young pioneer of bio-architecture soon developed the idea that the planet is in danger and man must find solutions to this unfortunate situation.  To do this, he dreamed of being able to build without destroying the environment, by following the constraints of nature.  “However beautiful a building is, it is a vain act when it is not in harmony with Earth”, this visionary stated.  “Global warming is a great tragedy.  We are heading towards a brick wall at top speed.  I suggest we accelerate more slowly.  I want to give strength back to the imagination.”

Concerned about preserving the ecosystem, Luc Schuiten imagines new forms of human habitation.  His idea is simple: why not use natural organisms as the basic material?   This is the concept of archiborescence – a combination of architecture and arborescence.  He has travelled to the frontiers of ecological thought by way of his poetic work designed to preserve the environment.  His pencil traces new perspectives of a totally fulfilling future world, freed from energy based on fossil fuels and free from pollution.

On his drawing table, there are a host of plans featuring vegetal streets and cities, and clean cars.  A car using renewable energy, shaped in the image of a leaf blown from a tree by the wind, emerges from his studio.  His imagination anticipates the future of humanity from the standpoint of a radically new aesthetic that breaks with the classical rules of urban planning.  Luc Schuiten explores and invents the future inspired by biological processes: shellfish produce a bio-cement and insects produce bio-glass.  In his mutant city, the architecture of tomorrow quite simply follows the characteristics of living organisms.

His archiborescence is also a metamorphosis of our way of thinking.  It represents other interactions between man and nature different from those that we know today.  His city is not linear.  It is not a celebration of concrete or iron.  It can be found in the philosophy of sustainable development; his “inhabitrees” (habitarbres) turn space into poetry to respond to the concern to live together in a better way.  Luc Schuiten has only one single rule, the harmony between man and the planet, poles apart from the brutalism of modernist cities built by pillaging natural resources.

” Imitating nature and trees to create a new form of habitat: that is the principle of the archiborescent city and habitarbres: houses that grow like trees with bio-textile walls.  The structure of an habitarbre is a strangler fig tree whose growth is guided by stakes to form a sustainable home.  The tree is the most beautiful object that nature has produced.  What a terrible shame it is to kill it, cut it and torture it chemically for building purposes!  Hence the idea of these living habitarbres to build a future that is really different from the one we are offered today.”

Following in the footsteps of Leonardo de Vinci

The Belgian architect admits that his work takes on a profoundly utopian dimension.  Politicians become very nervous when faced with his projects.  A Brussels minister had once approved his plans to cover the façades of the European Union buildings with vegetation, but then the minister’s successor quickly buried the project.  Tangled branches and leaves adorning the windows of the European Council did not give a very serious impression.... and how could they give credit to an architect who was driving around in an electric, pedal-push car?  Luc Schuiten belongs to the race of geniuses who are not understood.  One of his prototypes designed to resolve the problems of mobility, the ornithoplane with flapping wings, establishes a direct link to the strange machines designed by Leonardo de Vinci.

In the 21st century, public authorities seem to have lost the ability to see beyond the next elections.  By contrast, Luc Schuiten’s view goes beyond where the eye can no longer see.  He has placed biological time at the very centre of society and proposes a future free of immediacy.  His thoughts read into the future of the world, to 1,000 or 10,000 years hence.  He is interested in the issues of the future and endeavours to redefine our hierarchy of values in order to reinvent the places where we live.  Listening to him, one feels like starting tomorrow.  According to the inventor of archiborescence, paradise on earth would not be difficult to imagine: take a tree, look at it through the eyes of an architect and you will immediately feel the elevation to serenity.