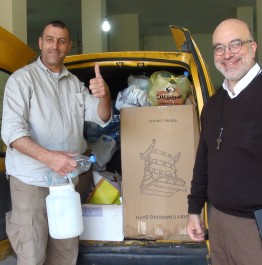 Father Jean-Marie Chami is a Lebanese priest unlike any other. Behind his round face and pleasant demeanour is an “eco” religious man who managed to integrate the protection of the environment with social work.

Jean-Marie Chami, 53, was not always religious. He studied architecture before becoming the priest of Notre Dame Church of the Annunciation in Zoukak el-Blat, a neighbourhood in Beirut. In fact, between the ages of 15 and 21, he was an atheist, before he “unexpectedly found faith during a stay in France.” One of Father Chami’s hobbies is recycling, which he began practicing in his church office.  Shortly after, he met with the hearing impaired and became their chaplain. “One day, I received a telephone call from someone hard of hearing who wanted to organise a concert. This call was prophetic,” he explains. Father Chami did not stop at the concert and founded L’Ecoute in 1999. The non-profit organisation aims to meet the needs of the hearing impaired living in difficult circumstances.

Through L’Ecoute, Father Chami has managed to combine ecology and social work. “Yes to recycling, not just for nature and the environment, but for the people first and foremost,” he says. “If not, we miss out on the essential.” This philosophy is captured in the association’s motto, Together towards the recycling of human energy, and mission statement, summarized as, Hear everyone, but listen to the poor.

Today, these two pillars come together in a hangar in Hadeth, an Eastern suburb of Beirut. The workshop, launched last December, employs 17 volunteers of different nationalities. L’Ecoute is not strictly for the hard of hearing. People suffering from other forms of physical or mental disabilities, and people living in difficult social situations are equally active in the association.

In the workshop, volunteers sort non-organic materials retrieved from 1200 L’Ecoute patrons (companies and individuals) at 200 collection points across Lebanon. "Everyday, we sell sorted materials, usually to factories that recycle paper, plastic and metal," says Father Chami. The business runs smoothly, but the fruits of collection—scrap metal, plastic bottles and bags—continue to pile up on the workshop floor, nearly reaching the ceiling. Father Chami awaited the April arrival of a compression machine for plastic bottles, to improve the workload.

In the corner of the atelier, four volunteers disassemble electronic devices. L’Ecoute recycles electronic products, the “house specialty”, in addition to its traditional recycling activities. “We were told that we are pioneers in the field. I can’t be sure. But if it is the case, we are delighted,” says the priest, who apologetically gesticulates when speaking, “a habit of using sign language for the deaf volunteers.”

Printers, computers, electronic appliances, televisions...everything is meticulously dismantled by the volunteers. The work is not without risk as toxic substances can be released during disassembly. Brass coils and metal screws are resold. “Some parts need to be cleaned to be of value,” says the priest.

On a human level, the volunteers’ smiles says it all. “I have been working here for 6 months. Before, I would stay at home,” says Anthony, a young man of 19 who suffers from cerebral palsy. “Today I am very happy to be working in a team,” says the young man with the help of Father Chami, who acts as interpreter.

Ahmad works on radios, printers and televisions. “What do I like here? Feeling responsible,” declares the man who suffers from psychological problems.

Refugees also benefit from the program. “I have travelled a lot since I was separated from my parents,” says Kwal, a 48-year-old Sudanese man nearly two meters tall. “I went through Libya, Iraq, Jordan... In Lebanon, I obtained refugee status with the UN. I was amongst the first to work with the L’Ecoute team. "

Everyone leaves a winner with L’Ecoute – the environment and also the volunteers who have found new purpose and place in society.

Though success is at the front door, obstacles still remain. Profits are almost entirely given to the volunteers “so that they can live with dignity,” says Father Chami. The remainder is allocated to workshop operational costs. “Little to nothing is reinvested, especially in these difficult times,” he continues without losing hope. “Donations are expected.”

Another problem is that some customers want to be paid for providing recyclable materials. "Everywhere else, people pay to get rid of their waste!" protests Chami. These barriers are not enough to discourage him. “A few years ago, the whole project would have been impossible. Things are changing and we must always move forward. Being the voice of the voiceless, the eyes of the blind—this work makes me feel alive.”

Video : http://www.sparknews.com/fr/video/lecoute-recyclage-lebanon-save-earth-help-disabled
We use cookies to measure the audience of our website and to optimize your online experience. By continuing your visit to this website, you accept the use of these cookies.Ok