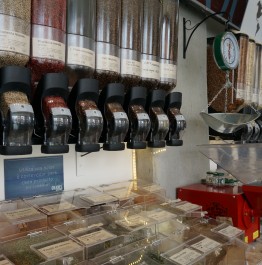 Retro Ecology for a Simpler Life

Environmental consciousness is key to living a simpler life and living an eco-conscious life is all encompassing; it’s not just food and its containers that can be recycled or reused. For twenty-eight year-old Louise Salvati, what began as an effort to avoid sending anything to the landfill, ended up being a complete reconstruction of her lifestyle.

Clothing that she had worn only once, extra tableware, redundant furniture, and other excesses of daily life were donated to those who really needed them. Homemade cleaning supplies and wholesale food replaced synthetic products and individually packaged food. “Whatever can't be reused, recycled or turned into compost goes into a transparent container in the middle of the kitchen as a reminder of how I’m doing,” she says. In a year and a half, only one plastic item has ended up in the container – the packaging for the lock on her backpack that she used during her “Zero Waste” tour.

Before discovering she could live with less, Salvati would congratulate herself for knowing how to recycle: “Many people think that just a small effort can change the world, and that's fine, but I hadn’t seen the full dimension of the problem.” Once she did, she anticipated complications as part of her new life. But those complications never materialized.

“After three months, my life was easier and less expensive: I had less things at home; it wouldn't take me so long to find the right outfit for the day, I didn't use make up and I didn't spend days shopping. Now I had the time to take a walk through Paris, even to venture out of town.” Buying everything wholesale and collecting the compost for use in the garden was the key: “I do cook more than before but my health has improved.”

After sharing her experiences this last year through social media, Salvati quit her job as an event organizer with a pharmaceutical company and together with her boyfriend started her journey around the world, financed with the savings from her new minimalist lifestyle. Carrying only seven kilogrammes of carry-on luggage and nothing else, they visited Peru in April, Bolivia and Colombia in May and are now on their way to the United States. “At home, everyone would tell me that in France it’s much easier to live without producing waste,” said Salvati, “so we set out to prove it can be done anywhere.” These last two months, Salvati and her boyfriend have travelled everywhere by public transport, drank tap water, used their own drinking glasses and refused anything packaged in plastic. The result: zero waste.

Over the last few months, Salvati has also found other unnecessary costs of life in the twenty-first Century, such as excessive energy consumption and the toll of the meat industry and its impact on the environment. Another element of contemporary life is the impact on one’s emotional wellbeing. “A minimalist life also includes getting rid of the trash inside our heads: the wrong friends, wrong jobs and bad relationships. One must have the courage to stop accumulating,” she assures us. “Like many other things, we have no need for them.”