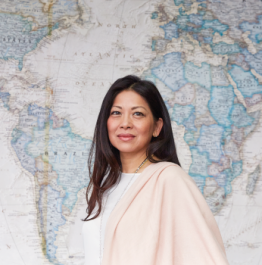 She Even Encounters Children in Prison

Philippe Reichen
//
@PhilippeReichen
With her Geneva-based NGO, “International Bridges to Justice” (IBJ), Karen Tse is taking action against arbitrary justice and torture. Thanks to IBJ, even the poorest prisoners will get a criminal barrister to represent them.

In the political arena, Geneva is full of contrasts: While United Nations (UN) diplomats are rarely in need of anything, non-governmental organizations (NGOs) are often quite hard-up. NGOs simply do not have the money to spare for generously sized offices in glazed towers, where diplomats like to go for meetings. The globally operating and ambitious NGO, “International Bridges to Justice” (IBJ), is no exception. With an annual budget of only three to four million Swiss francs, resources are tight and have to be applied in a targeted manner. The dozen or so employees work in dark and confined offices in their Geneva headquarters, far away from the elegant UN district, the furniture has seen better days and it seems that some employees are even using their own laptops. They are used to going without luxuries, they all know there are more important things in life than comfortable office chairs.
Karen Tse, founder and head of IBJ, leads by example. Born in California in 1964 to a Chinese family of immigrants from Hong Kong, the human rights activist has travelled around the globe for her NGO for almost two decades. She gains access to prisoners and meets accused people that may have been waiting without charge in investigative custody for years. She talks to prisoners who have been tortured by the police and, despite being innocent, confessed to all they could think of just to escape physical violence; and time and again she meets children accused of petty crimes by the judicial authorities and sent to prison. Herself a mother of two, Tse, says: “For us, dealing with the accused is not about good or evil. This is solely about the principles of the state of law. No child belongs in prison, torture should be abolished, and every accused is entitled to a thorough criminal investigation and must be defended by a lawyer, even if he can’t afford legal counsel.”
Embarrassing judicial error
With “International Bridges to Justice,” Tse, who has studied both theology and law, addresses problems from all sides: “We talk to government officials about the established law in their countries and encourage reform, we talk to prosecutors about fair criminal trials, make policemen aware of human rights, win over lawyers for pro bono cases, and inform prosecuted people about their procedural rights,” she says. “The sooner someone has an attorney, the smaller the risk for misuse: both for the accused and future generations.”
The workload is enormous, IBJ estimates that around the world three million people are imprisoned who were never charged by the judicial authorities. The NGO often goes public with cases like the recent one in Sri Lanka where thanks to a lawyer engaged by IBJ, the Sri Lankan judicial authorities had to release three men convicted of murder. The men were convicted in April 2013, after police found a disfigured body without any lead on the perpetrator. Since a fisherman had been reported missing at the same time, the police believed the body to be the missing man and arrested three suspects from his area. Things became embarrassing for Sri Lankan justice when the lawyer engaged by IBJ found the missing fisherman in Vietnam, called him to serve as a witness at home, and thus proved that the three men had nothing to do with the murder. If IBJ had not helped with a lawyer, those innocent men would still be in prison.
Convincing with good arguments
In order to address problems in a targeted manner, IBJ now has offices in six countries: China, Cambodia, India, Burundi, Zimbabwe and Rwanda. There, Tse convinces lawyers of her cause and trains criminal barristers to help the accused. According to its own information, IBJ cooperates with 400 associations, universities, and other NGOs all over the world, and has so far trained 22,000 lawyers to the direct benefit of 30,000 people. Moreover, it finances so-called “JusticeMakers” projects in almost 40 countries, which aim to reform local judicial systems in one way or another.
The actions of “International Bridges to Justice” are not popular everywhere. When states sense interference in domestic affairs, they resist and closely monitor the activities of the organisation. Karen Tse also monitors this, but she stresses that no state would be judged and that instead they should follow the pattern of Swiss foreign policy and use neutrality, impartiality and “soft governance.” In order to reform judicial systems they aim to convince governments with good arguments, rather than political pressure. Hilde Schwab, engaged to the advisory board of IBJ, says: “IBJ tries to act pragmatically instead of being confrontational.” She says that this is very important, given the fragile legal system in certain states.
In order to maintain a more intensive and global exchange of knowledge and experience with lawyers, bar associations, ministers of justice and JusticeMakers, IBJ works in Geneva to develop an “Internet Justice Hub.” By means of this hub, norms of criminal law in various states will be made available and lawyers trained with learning programmes, encouraged to talk about criminal cases and impart their knowledge. Karen Tse has some hopes from this project. She says: “This internet platform provides new and global solutions for a just criminal justice system.”