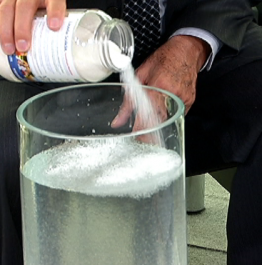 Water scarcity continues to increase around the world. According to the United Nations some 700 million people in 43 countries suffer this calamity caused by overexploitation of water resources and the irrigation of agricultural lands to enhance production when rainfall is scarce.

In 2006 the United Nations announced its International Decade for Action ‘Water for Life’ 2005-2015. The UN predicts that 1.8 billion people will be living in countries or regions with “absolute water scarcity” by the year 2025.

The challenge they identified is for the distribution of water resources in a responsible way, because almost half the world’s population will be living in areas of high water stress by 2030, including between 75 million and 250 million people in Africa.

But a few years before the publication of the 2006 Human Development Report by the United Nations Development Program and of the report “Coping with Water Scarcity. Challenge of the Twenty-First Century. UN-Water”, by the FAO in 2007, a Mexican scientist Sergio Jesús Rico Velasco from the Instituto Politécnico Nacional invented “Solid Rain” and founded the company “Silos de Agua” in 2002 to commercialize his product.

Slowly but steadily the news of his invention reached the world, opening a new window of hope for many countries around the world, including Russia, India, Ivory Coast, Colombia, Spain, Portugal, Chile, Peru and, of course Mexico; which began to experiment with the new product to ease water shortages for agriculture. In 2012 Rico Velasco was nominated for the World Water Prize.

The magic of “solid rain”, a compound based on potassium acrylate, is that it can store 300 times, even 500 times its own weight in water without causing any harm to the environment, nor triggering toxic chemical reactions regardless of the type of soil substrate.

The product looks like a white powder sugar but is made of ultra-absorbent potassium polyacrylate which Rico Velasco and other scientists call “water silos”.

So as an alternative to reducing water resources, this product stores rainwater and has the advantage that it can be kept anywhere, even in burlap sacks because the rain water molecules adhere to the potassium polyacrylate, which allows the gelatinization of the rain in the agricultural fields.

How does it work? Solid Rain encapsulates and disperses water during its lifetime, ranging from 8 to 10 years, it helps to aerate the soil, and permits agriculture in extreme climates and places with poor soil conditions.

The ideal usage proportion is four "silos", each one containing the equivalent of one litre of water. The comparative cost is minimal because the "powder" sufficient for one hectare has a price tag of around one thousand dollars.

Rico Velasco explained that this technology can be used in all kind of soil substrates and with all kind of plants because it produces no chemical reactions with pesticides nor fertilizers because “it’s just water” and it does not generate pollution.

The Solid Rain can regularly provide enough water to plants over a period of ten years maximum, while avoiding water stress and evaporation. Moreover, the solid rain particles can be rehydrated with each agricultural cycle.

How is it used? Farmers need to take a spoon and mix 20 grams of Solid Rain with one liter of water, then mix it into the soil. Then plant theirs seeds and mix it in with the soil of other plants.

According to Solid Rain Corporation from San Diego, California, the product is capable of saving between 50 to 80 per cent of water, depending on the climate and soil conditions and from 30 to 50 percent of water usage in greenhouses.