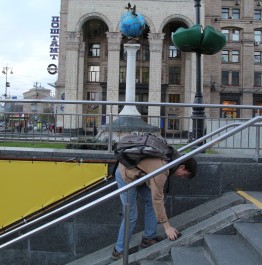 Subway for all: sharing data on accessibility

Do the stations have elevators? How many steps are there on the staircases? Are there any escalators? What is the height difference in levels when passing between stations? Do the staircases have ramps?... Maxim and Anna collect a variety of data regarding the accessibility of stations for people with reduced mobility, in order to then send this info to the three developers working in their company, who subsequently transform this information into visual routes for users.

Using the application “Metro for All”, available for free download at http://metro4all.org/, people with reduced mobility - whether they are disabled persons in wheelchairs, or mothers with strollers, or just travellers with heavy luggage - can study in detail the infrastructure of each subway station, and plan the most suitable route.

Based on the collected data, the team also ranks the metro networks based on their accessibility. They have thus found that the Eastern European systems - Moscow, Kiev, Minsk, and Warsaw - are less accessible than those of Western Europe - Amsterdam, Lausanne, etc. “In many large cities, sometimes it is simply impossible for a person with reduced mobility to travel from point A to point B,” says Maxim Dubinin. In Moscow, where the project team is permanently based, only 8% of the metro stations and 30% of the routes are accessible to people with reduced mobility. This is something that the “Metro for All” team wants the government authorities to understand, so a plan can be put into action to address these problems. “The ultimate goal of our project is, of course, that our findings will lead to concrete actions,” stresses Maxim.

The team has prepared a hundred-page report – available for free, and accessible to all on their website - containing recommendations to improve public infrastructure for people with reduced mobility, which they have already sent to several organizations fighting for the rights of the disabled, and to Russian authorities.

However, so far, this initiative has not borne fruit. “We understand better than most people, that to develop a metro network for people with reduced mobility is very complicated, and often requires considerable investments. However, many small modifications can be made today, particularly to doors, turnstiles, staircases, etc. Because one of the big problems, as we have pointed out - is that certain infrastructure already exists, but it is incomplete or inadequate, says project coordinator Anna Smirnova. Some metro stations in Kiev, for example, have lifts, which is a good thing, but their access doors are horribly heavy and narrow. The wheelchair users – the ones who need them the most – cannot use them at all,” she adds.

The five Russian technological innovation specialists behind this software application “Metro for All” are now looking for partners - disabled persons’ rights organizations or others - that can act as relays, to bring this project to the attention of decision makers. “In the two years of our existence, we have now mapped thirteen metro networks, but there should be a similar service in all cities of the world and for all means of transportation! We are more than willing to do this, but we need help,” insists the founder of this application, which he created in 2011 at his technological innovation enterprise in Russia – the NextGIS.

Financially supported by NextGIS, the application “Metro for All” for now exists thanks to the motivation of its creators. “The project designers are allowed to let their imaginations run free, and test new innovations,” says the 31-year-old founder. Thus, the team has set up a system - a test version, inaccessible to the public for now - that complements the metro routes with supplemental detailed walking itineraries. “We also plan to replicate the subway stations in 3D, giving an opportunity for the user to participate, by providing advice, and adapt this application for use on the IPhone - it only works on Android for now,” said Maxim.

In the future, the team would like to develop an underground navigation system, which can be used without an Internet connection. “No GPS systems, at present, is able to operate underground and without the Internet – this would be the first of its kind in the world, insists Maxim, who studied for five years in America before returning to work in Russia. The possibilities are endless, he adds. The idea, ultimately, is that the collected data will be available to all users. In short, a real metro for ALL!” he says enthusiastically.