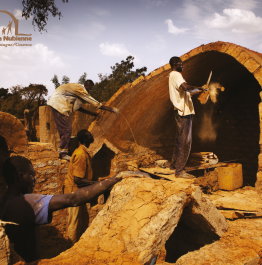 Abdoulaye TAO
In 1998 Thomas Granier (French), in collaboration with Seri Youlou (Burkinabe) launched a social initiative with the aim of popularising the Nubian vault. Their hope was that this economical and ecological housing alternative could provide a long-term housing solution for all. Two years later, they established the Nubian Vault Association (L’association voûte nubienne: AVN) and begun teaching Nubian vault construction to farmers in the central western province of Bale Hounde in Burkina Faso.

Their strategy is simple; firstly, AVN selects an individual in a community whose job is to familiarise locals with the concept of the Nubian vault. Once an interested client base and a group of willing apprentices have been established, AVN sends a training officer who teaches the apprentices how to construct Nubian vaults. Their intention is then for the Nubian vault industry to grow, become autonomous, and for the market for Nubian vaults to spread to other villages in the region.

“The builders we train are independent unsalaried workers. We put them in touch with clients, but we take no commission. What interests our association is the popularisation of the Nubian vault, and although our work may one day come to an end, if the technique is widely adopted by builders, Nubian vaults will continue to be a cheap housing solution and a source of revenue for years to come.” Explains Boubacar Ouily, AVN’s chief coordinator.
AVN now boasts over 380 trained builders with 300 apprentices for a client base of over 20 000 people.

A housing solution for big cities as well as rural areas

Nubian vaults have since become popular in the region of Boromo (Where AVN’s offices are situated) and have spread across five other regions. As a result, a market for Nubian vaults is starting to emerge in big cities. Including, much to the delight of AVN, in Ouagadougou, the capital of Burkina Faso.
March and April are the two hottest months in Burkina Faso, with temperatures often rising to more than 40ºC in the shade. In homes and offices, built in the most part out of cement and concrete, the only solution to the heat is air conditioning. As a result, energy consumption during these months is extremely high, to the point where the national electricity provider is unable to supply sufficient electricity to meet the sudden increase in demand. As a result there are systematic power cuts across the city during these months. Consequentially, in the heart of the affluent district of Ouaga 2000, where villas and futuristic homes line the streets, a new trend in housing is beginning to show. Inspired by ancient techniques, the buildings are made from only earth bricks and earth mortar. Nubian vaults, recognisable by their thick walls, lack of roofing tiles and the absence of wooden beams, are becoming increasingly popular due to their cooling properties. Nubian vaults also only use locally sourced materials in their construction: adobe, clay and straw, and are thus ecologically sound.

An increasing demand for Nubian vaults

After 14 years of promoting their advantages and training builders in their construction, Nubian vaults are becoming commonplace in Burkina Faso. Bouabar Ouily, AVN’s chief coordinator, explains that: “for the last three years we’ve been overwhelmed by the increasing demand for Nubian vaults. In 2014 we were unable to satisfy 43 requests for homes, in 2015, 23 requests went unanswered.” Whilst maintaining a focus on development in rural areas, AVN is trying to adapt their methods to the increasing demand for their product.
As a result AVN is in the process of restructuring their training program in order to improve the quality of training, and with the hope of being able to train a greater number of apprentices. Their plan is to develop construction sites, which have a purely educational function, so as to allow apprentices sufficient time to become accustomed to the work. The head builder of AVN, Idrissa Sawadago, explains that they don’t have sufficient time to adequately train new apprentices on real construction sites, as they are working to a deadline.
AVN has also implemented an initiative, which aims to attract traditionally trained builders who are interested in expanding their skill set to Nubian vaults. Sawadogo believes that these new systems should allow them to more efficiently and more effectively train apprentices, in order to respond to a demand that is increasing by 30% each year.

Adapting to the future

Sawadogo also explained that many clients are submitting plans designed for buildings made of concrete, and requesting that he adapt the plans for construction as a Nubian vault. As these clients often want houses with large rooms he needed to overcome one of the primary constraints of the Nubian vault, which is that walls cannot be more than 3.25m apart. Thomas Granier, the founder of AVN, thus explains that as a result one can now find Nubian vaults, which include concrete beams in their construction, however that this doesn’t negatively impact the comfort of the house in any way.
AVN has now expanded its work to five countries: (Burkina Faso, Mali, Senegal, Ghana, and Benin) however they’ve received little support from national governments. Despite recognising the benefits of Nubian vaults, governments have been hesitant to offer Nubian vault construction as a vocational training course, or even to allow community buildings to be built with the Nubian vault technique.
AVN is thus in need of investors to continue their work. They hope however that mainstream construction companies will begin to offer Nubian vaults as a housing option and Thomas Granier hopes to teach managerial skills to their builders in order to provide them with a greater autonomy.