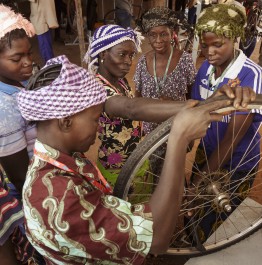 Cécile Denayrouse
By recycling old bicycles destined for the scrapyard, Swiss organisation Velafrica is working to improve the living conditions of more than 500,000 people across Africa.
Who would have thought that the theft of a bicycle in Switzerland would come to change the lives of more than 500,000 people across Africa? And yet, it’s true: this philanthropic vision began in the 1990s, when Zurich-based Paolo Richter, a student at the time, stole a bicycle. Making up for his lack of money with excess ingenuity, Richter dismantled three old and unusable bikes before utilising the parts to construct one new mount, in perfect working condition. During a development mission to Ghana, this idea became the seed that began his career path.
Richter bleakly realised that, without bicycles, Ghanaian women and children were forced to walk several hours to buy food, reach the nearest water source, or even attend school every day. In 1993, this Swiss mechanic and entrepreneur began repairing old bikes with the help of some volunteers and unemployed workers, all to sell for a symbolic price in various regions of Africa. Almost 23 years later more than 150,000 bikes have been shipped from Switzerland to areas of the Ivory Coast, Eritrea and Ghana. To this day, seven countries profit regularly from this Swiss expertise with the help of some carefully selected partner organisations.
But is it really better to send bicycles to get the wheel turning in the place of cold, hard cash? “Here, people throw [bicycles] away as soon as they are broken, but in Africa, a bike can transform the daily life of an entire village,” explains Thomas Marti, the Velafrica manager for the Romandy region. “It’s a tool that makes an impossible journey possible. It is estimated that a recycled bike can continue to work for another 10 to 20 years in Africa, with one bike serving an average of four people. It allows around three times more sellable products to be transported, and helps people travel four times faster than they would by foot.”
Furthermore, by reducing the distances to be travelled, the bikes have a real economic, social and environmental impact. They can help towards reducing poverty, as well as improving social inclusion and the physical health of their users, whilst also acting as both a sustainable and an efficient means of transportation.
Bicycles, however, do require maintenance and repairs; whether it’s for a small puncture, a bent wheel or for defective brakes. Thankfully, Velafrica has both recognised and solved this issue. Not content with solely providing the two-wheeled vehicles themselves, the organisation also offers a contingency plan.
“ It seemed important to us that the bicycle frames did not become abandoned once they had been received in Africa. Therefore, we are training both male and female mechanics on site in Africa to give them the skills to repair the bikes. That therefore creates jobs in the assembly, maintenance and the selling of the products. The aim is to empower our partners, so that they are not dependent, for example, on potential sponsors. The bikes that leave are in perfect functioning condition and are sold there for around 50 francs.”
The positive impact of this intercontinental trade can be equally measured in Switzerland. This is mainly because, from the beginning of Velafrica, Paolo Richter decided to collaborate with rehabilitation and labour-reintegration workshops to build both bicycles and a sense of community. And Velafrica is easily hitting two birds with one stone. Not only does this process work from an ecological perspective – saving around 20,000 nails alone from the scrapheap every year – but it also promotes social and professional integration, providing industry for both the long-term unemployed and, more recently, migrant workers. In total, around 300 people in Switzerland help to recycle and breath life back into these bicycles, benefiting from fixed-term employment. “We work with 30 different local partners and have been able to open a second integrative workshop for refugees” explains Thomas Marti. “They come to us for three months, working five half-days per week. The result: the atmosphere in the studio has changed; we hear much more laughter and music than before, which is such a positive experience for everyone. Moreover, there is something so motivating and rewarding for the Eritrean workers here, at home, to say that they are repairing bikes destined to improve the lives of other Eritreans”.
Today, the real problem lies in the lack of old, donated bikes. “We have enough buyers, enough demand and enough partners, both here and in Africa. However, we never have enough bikes. This beneficial activity is only made possible by the donations and gifts from people. But it takes time to spread this message around…” It is estimated that there are around 1 million unused bikes in Switzerland, going red with rust, with around 500 organised collections occurring per year. This may seem like a good start, but – without a doubt – we can surely do better than that both in Switzerland and worldwide.