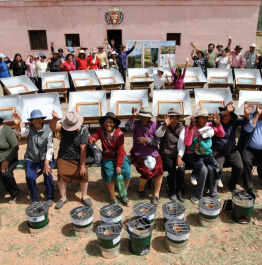 A Frenchman who makes solar ovens in the north of Argentina

Teresa Zolezzi
Thanks to Pierre-Yves Herrouët, a tourist-adventurer who discovered communities who needed him as he journeyed through Argentina, over 3,000 families in Jujuy and Salta can now cook using solar energy; he fell in love with the place and its people and decided to settle there and use his experience to help others.

Urged on by a desire to travel the world and open himself up to meeting new people, Pierre Herrouët left his homeland of France on a sabbatical year. With map in hand and following his instincts, he marked out countries which would form part of his adventure: Russia, Mongolia, South Korea, China, Japan, Vietnam, Cambodia, Thailand, New Zealand and Chile. Argentina did not feature on the list, but a change of plans led him to Salta, in mountainous north-western Argentina, where he settled 12 years ago, started a family and set up a social organisation called Solar Inti, dedicated to the construction of environmentally-friendly solar ovens for vulnerable communities, poor families, schools and children’s soup kitchens.

“I left my job in France, where I was doing well, and sold my car, my freezer, my bed, and my clothes. I took the gamble because I have always thought that the more different people and their cultures are, the more interesting they turn out to be,” says Pierre, a 40-year-old agricultural scientist whose childhood was linked to the countryside; fishing and spending time with his family. “When I was young I put down solid roots, and that helped me later because when you travel you have to have those strong roots in order not to get lost and to find a deep meaning in what you are doing,” he explains.

When he was travelling through Chile, he felt a desire to visit Argentina and learn to dance the tango. “In Salta I really liked the way I was welcomed and I enrolled in choir and dancing lessons straight away,” he says, “because I learned that if you only see the typical tourist places when you travel, you don't see anything. But if you start to join in with activities which are typical of the place itself, you really discover it.”

In Salta he came across the Siwok Foundation, which focusses on community development of the indigenous population. They told him that they were running a project to reassess the indigenous culture, and Pierre wanted to help. Josefina, a Salteña he would later marry and start a family with, also joined the programme. “We got to go into people’s homes and see how they cooked, the toxic smoke they inhaled (each meal made with the basic stoves they used was equivalent to smoking 40 cigarettes), the amount of soot generated and how they carried 30 kg of wood on their backs every day," he remembers.

Pierre got in touch with his old physics teacher and started to look for funding to build the first ten solar ovens for an indigenous Colla community in the Salinas Grandes of Jujuy. Instead of giving them the ovens, he was given materials and so he organised participative workshops where the indigenous population were taught to make rectangular ovens from aluminium, glass and wood. The pilot project was a success, and when the training was finished 80 more families with the same need came forward, giving rise to the social organisation Solar Inti, which in the last eight years has built over 3,000 solar ovens in Salta and Jujuy. They have also developed new sustainable models, such as fuel-efficient wood-burning stoves, ecological baker’s ovens, solar dryers and ecological showers.

In this way, Solar Inti is helping to improve the quality of life for those families living in vulnerable and isolated areas who do not have access to electricity grids and natural gas lines; it has reduced wood consumption by 80–90 per cent and contributed to a reduction in lung diseases linked to smoke inhalation from burning wood. It has also reduced the impact on the environment through the reduction in the number of trees and shrubs being cut down, and improved household finances through the sale of food cooked with these ovens. “We have noticed how happy the people are when they see how their living circumstances have changed. The community has been strengthened thanks to the workshops and they feel able to take on other projects. That is empowerment,” Pierre smiles.

As well as the technical workshop for building ecological ovens, Solar Inti offers training for maintenance, cooking and diet, saving-fuel, impact on health and the environment, applications for regional gastronomy and micro-business development. As a way of giving thanks and a form of payment, the families who received training in each community are responsible for teaching others how to make and use these sustainable products, thus spreading the knowledge acquired.

The solution to a problem which affected the lives of people living in the north of Argentina came from an inquisitive Frenchman who decided to turn his life in a different direction. Pierre's happiness in Argentina was far from guaranteed, but he followed his instincts and he was right to do so. “I am pleased I decided to leave the comfort I had and to take a risk in order to be happy. I would have regretted not doing it, but fortunately I can say: mission accomplished!”