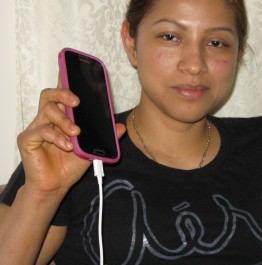 Carmen Hernandez, 34, lives in Dallas with her husband and five children. Her husband works in construction, earning about $50,000 a year. Hernandez makes party decorations and tailors clothing, making $800 to $1,000 a month.

In February 2014, the family only had $300 in savings. That month, Hernandez began using a program called Juntos that sends text messages to her mobile, a basic cell phone.

The texts would ask her things like, “Do you want to save more?” If the answer was yes, she would respond with an amount, which would be deposited into her savings account. Or, they might ask if she had an emergency and remind her that she could use her savings. Or, they might just encourage her to continue saving.

“All the messages they send really help me,” said Hernandez, with her 14-year-old son acting as translator. “If I didn’t use it, I would save less.”

The San Carlos, California-based company behind the program, Juntos Finanzas (which goes by Juntos), promotes financial inclusion and helps first-time bank account holders, or the “newly banked,” to manage their money. “Our hope is to increase active client rates and active balances in accounts,” said Katie Nienow, cofounder and vice-president of business development.

The company got its start in 2009 at the Institute of Design at Stanford, when a student named Ben Knelman (now CEO) created a simple app to help the school janitors. Initially, a janitor named Karina laughed at the idea that she could save on her $21,000 salary. But a year later, she had saved $2,000 by using the app. Juntos went on to win the innovation award for financial inclusion at the 2012 G20 summit in Mexico City.

In a pilot study in Colombia, participants working with Juntos ended up with 50 percent higher balances than the control group. Many users, who already feel connected to their phones—one referred to hers as her baby—end up feeling such a personal connection to the app that they respond with messages like, “I just want to thank you for your help. Your motivation has been very useful.”

The company now has 200,000 users, obtained through partner financial institutions, in Colombia, Mexico and Tanzania. A team of writers with backgrounds from psychology to design use behavioral economics and on-the-ground research to customize each version to the dialect and culture of that country. Juntos also has a version for users in the United States, which is targeted at recent immigrants who are new to the banking system.

“In recent years, innovations like branchless banking, mobile banking and mobile money have meant that banking services could be provided to the poor at cheaper cost, so access to financial services was becoming a reality for the poor,” said Nienow. But while banks have an easy time getting people to open accounts, customers often immediately let their accounts fall dormant, or unused. Dormancy rates for the newly banked range from 40 to 90 percent around the world.

People who don’t have active accounts may engage in behaviors that put their money at risk. They may keep cash at home, where it might get stolen. Or they may use risky or difficult-to-liquidate informal savings vehicles, such as asking a family member to hold their cash or buying inventory for their small business.

“When the poor have their money weighing too heavily on their minds, they’re not able to give their mind to other things with their full presence, which has implications for their job performance and their future earning potential,” said Nienow, citing studies that showed that people perform less well on IQ tests when money is scarce.

Dormant accounts also cost the banks, which spend time and money to develop, advertise and maintain them. That makes Juntos and financial institutions natural partners: the banks have customers that Juntos can target for financial inclusion, and Juntos can help banks lower dormancy rates.

After enrollment, which may or may not be automatic, depending upon the institution, a user receives a note from Juntos explaining that the service acts as a free financial coach. The company will try several different texts to see what gets the person to write back, then refine its algorithms based on the responses it receives. “We’re constantly testing different messages to see what resonates the best,” said Nienow.

Once a customer replies, Juntos will ask her if she’s interested in a particular aspect of the account. For instance, if she gets free health insurance for maintaining a certain balance, the company will send reminders of that.

Antonique Koning, a financial sector specialist at The Consultative Group to Assist the Poor, says that Juntos’s use of algorithms to analyze big volumes of customer data and continually update responses is innovative among organizations tackling financial inclusion. She feels that the Juntos platform helps people to believe in their banks.

“Providers need to become much more focused on the customers, better understand the customers’ realities, needs and preferences, and develop solutions that help,” she said. “People don’t trust the financial system because the system doesn’t speak their language.”