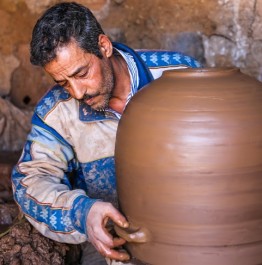 The natural refrigerator: preserving food and medicine in low-income communities

Sabrina Belhouari
Inspired by an ancestral Moroccan design, natural clay-based refrigerators are being used as an ingenious solution to a variety of modern day problems. A young start-up company is aiming to provide these refrigerators to low-income communities without access to electricity, since they are designed to store both perishable foods and vital medicines – such as insulin – at low temperatures.

Like many women living without electricity in villages across Morocco, Fatima watches her family’s food supply constantly ruined by changes in temperature and humidity. Due to these circumstances far beyond her control, Fatima has learnt to organise both her and her family’s weekly food intake so as to minimize these losses. However, these practical alterations come with health-related consequences: an unbalanced diet, rich in fruits and vegetables just after market day, then heavy in starch and legumes towards the end of the week.

The ability to preserve food over a longer period of time is a vital necessity for both rural populations without access to electricity and for low-income suburban families.

“The idea for this project emerged when we noticed a need for natural refrigerators during a number of field trips made through Enactus (1), of which I am a member”, explains Raowia Lamhar, co-founder and CEO of Go Energyless. In early 2015, Raowia and her team created the first clay-based refrigerator prototype by collaborating with a local potter in Zenata, near the city of Mohammedia. This storage tool gives the user the ability to preserve food products for around 10 to 15 days, depending on the conditions.

In considering the physical and chemical needs of the clay they were using, as well as looking to work alongside potters with a higher level of expertise than those in Zenata, the Go Energyless team relocated to Marrakech. “When thinking about the quality we want, the clay of this particular region is more interesting to use and the two potters we are now working with are able to complete the task to much higher standards,” states Raowia.

Today, thanks to the implementation of this ancient cooling method, women like Fatima are able to cut down on around 20% of their expenses, as well as having access to a much more diverse food supply.

However, far from being a mere kitchen utensil, the natural refrigerator has also become an incredible solution to a far more critical problem: how to preserve medicines without electricity. Medicines such as insulin lose all of their effectiveness when they are not stored in the right conditions, away from strong light and heat sources. In certain regions of Morocco, where temperatures can reach above 50 degrees Celsius in the height of summer, a lack of refrigeration techniques can prove life threatening.

Ahmed, a native Moroccan from the Ahdri region near the city of Meknes, has already paid the price for this lack of local, available refrigeration. As a sufferer of diabetes, Ahmed used insulin that had been subject to heat damage, and was hospitalised for four days from a hyperglycemic coma. The only method he could think of to maintain his insulin at a low temperature was to bury the vile of medicine under a layer of soil before soaking the earth in water. This may have once been an efficient ancestral method of maintaining supply of drinking water, but its not exactly ideal for looking after a vital medicine such as insulin. With the natural refrigerator, our ability to preserve both medicine and food without electricity has been greatly improved, says Raowia.

Today, the start-up company is offering two different types of refrigerator. The first one is the more basic model, and is designed to cater for communities who do not have any access to electricity, costing around 220 DH (around 20 euros). The second, more aesthetically designed, model is aimed at biofuel-consumers, for a price of 350 DH (about 33 euros). These prices are calculated to cover the manufacturing costs.

Whilst still in the 5th year of her engineering diploma, specialising in water engineering and the environment, Raowia has also taken on the title of entrepreneur. Go Energyless, the start-up company she co-founded and which is launching this cool (and cooling) project, has a plan to pick up its pace by implementing a strong marketing strategy and increasing the efficiency of its production process.

After the general release of 50 different prototypes in 2015, this young company is looking to increase its rate of production to meet a growing demand. To achieve both this and its other goals, Go Energyless wants the natural refrigerator to reach a wider audience, primarily by sourcing donors able to fund their distribution to some of the poorest communities, where the need is greatest.