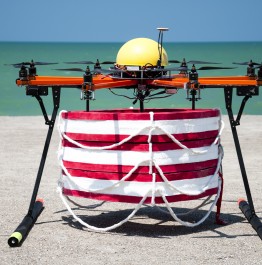 The Lifeguard is a Drone

Amin Rigi’s primary aim is to save people from drowning. But changing the public’s perception of drones would be a welcome byproduct of success for the 28-year-old Iranian robotics engineer seeking to bring a first-of-its-kind rescue robot to the global market.

Initially designed to fly above the sea and drop up to three life preserver rings to drowning victims, the latest iteration of Rigi’s robotic lifeguard can convert itself into a hovercraft and bring a potential victim back to the shore.

“We think we can decrease the number of drownings and we can save lives,” Rigi said matter-of-factly from inside a 250-square-meter London co-working space for start-up businesses, the place abuzz with the infectious go-getter energy of youth and possibility.

Despite their growing use in diverse industries ranging from film production to real estate and agriculture, civilian drones are still largely regarded with suspicion. Rigi wants to add “life-saving” to the lexicon used to describe these increasingly prevalent unmanned aerial vehicles and envisions a future in which his devices are used to aid victims who fall overboard from ships as well as those involved in car accidents, floods and fires, injured on hikes or stranded on oil rigs.

“We are thinking of drones that can actually be part of rescue missions,” Rigi said, pointing out that most commercial drones are capable of doing only surveillance.

His recent model, dubbed Roboguard, is waterproof, has the ability to land in and take off from water, can carry up to 15 kg of equipment and move at speeds of up to 50 km per hour.  Longer-range rescue missions will be possible thanks to its battery life of 15 minutes. The upgradable model can be outfitted with thermal cameras to aid in nighttime rescue missions, comes with detachable arms and functions with more autonomy, relying on GPS positioning and artificial intelligence more than on manual control. Eventually, Rigi hopes the line will include a solar-powered landing platform where the drone can recharge its batteries.

Two summers ago, successful trials at the Caspian Sea, where hundreds drown each year, included a race between the drone and a human lifeguard. That first prototype named Pars, after the ancient kingdom of Persia, reached a potential victim three times faster than its human counterpart, in 22 seconds instead of 90. Those tests yielded more than 100 emails expressing interest from some 32 countries—but with scant resources, Rigi could not respond immediately to requests. Today, the rescue drone is on the verge of test production, with a first limited run of about 200 expected this summer.

Distributors from Mexico, Brazil and Italy have already purchased the drone, whose retail value is about 8,000 euros (US$8,500), and customers from eight other countries, including the United States, Latvia and Australia, are in negotiation.

Rigi started RTS Ideas in Iran but relocated his company to London after he was accepted to Sirius, an accelerator program that brings young entrepreneurs to the United Kingdom to help them launch their businesses. Now he receives help with living expenses, office space, mentoring and access to investors. He has a business partner, Amirmahdi Taheri, 27, whom he met in October at the start of the program.

“I think we wasted too much time in Iran,” Rigi said, marveling at the invaluable resources available to him in the UK. “The more time we waste, the more people die.”

The oldest of three children also credits his parents with nurturing his teenage interest in new technologies and robotics, financing his early research and encouraging him to seize the London opportunity, especially when he was close to giving up and changing course. Unbeknownst to them, about a year ago Rigi started working for an online company selling customized LED lights to earn money after his resources dried up and his drone research stalled.

With a self-effacing laugh and a hint of nostalgia, Rigi recounts that uncertain time as well as the competitions he won and lost, the experiments he conducted, the robots he developed and his fantastic failures, including his disappointment at not being selected to advance in the recent “Drones For Good” competition.

His quiet faith and ardent belief that his success is tied to a higher power motivates him as well as the Muslim tenet that he who saves one life saves all of humanity. Profits, he said, do not drive him but a news report of six students drowning together in the Caspian Sea while attending a summer camp does.

“All technologies can both be used for saving lives and harming human lives,” Rigi said. “It’s not a matter of drones being good or bad. It’s a matter of why we are misusing these technologies.”